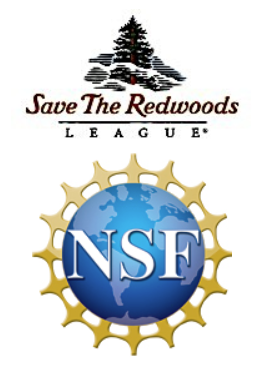 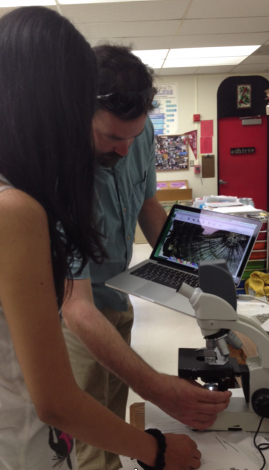 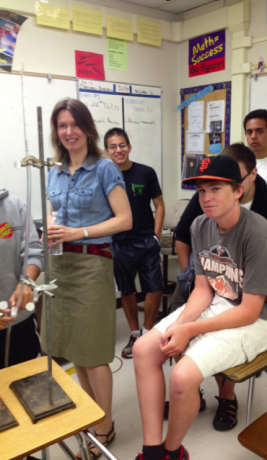 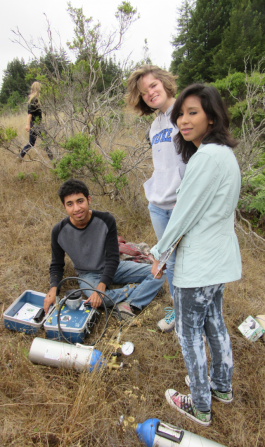 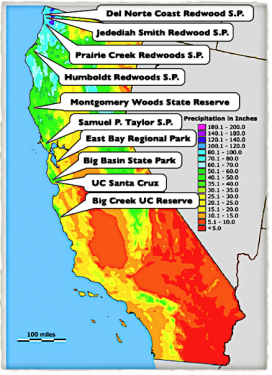 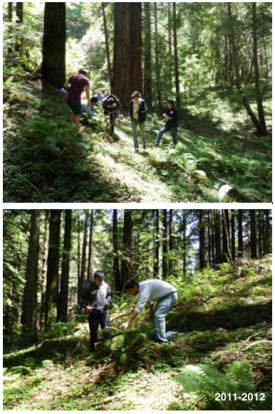 This past spring marks the first time that FERNWATCH made the leap into a the classroom.  Jim, Kate and I lead two modules on plant water transport with the AVID (Advancement via Individual Determination) students at Santa Cruz High School using a combination of model xylem and actual plants (see photos to the left).

In the first module, students had the opportunity to measure transport efficiency of systems comprised of variously sized tubes and to consider the costs and benefits of conduit size in a plant.  What happens when large conduits lose function?  Is there an advantage to having many small conduits versus several large ones?  What would make sense in California's coastal mediterranean climate? What are some ways in which plants deal with drought?  These interesting topics of discussion arose out of a simple exercise with plastic tubing and buckets.

Measuring flow rates was the goal of our second module and the grapevine stems did not disappoint! Students learned first-hand how vessel diameter affects hydraulic function by measuring flow rates through a variety of stems and comparing the xylem anatomy to species' performance.  Kudos to Kate and Jim for their keen help and enthusiasm with setting up these modules!  Many thanks to Nancy Cox-Konopelski and her staff at the UCSC Academic Centre for Excellence for providing crucial guidance, thanks to Ms. Ave Cope and Ms. Serena Palumbo for their help at Santa Cruz H.S. 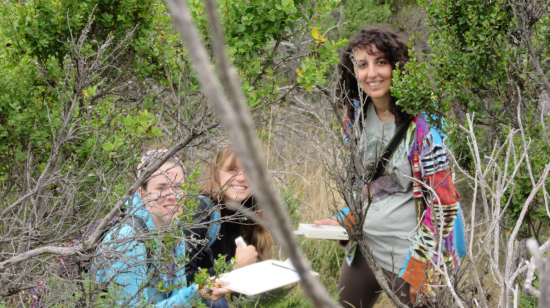 This year's departmental REU programme (organized by Profs. Laurel Fox and Barry Sinervo) focuses on climate change. Our lab lead a workshop on field methods in plant ecophysiology and naturally, we had the students gather some pilot data on the local fern flora, specifically the light and shade-acclimated populations of Pteridium aquilinum, that is bracken fern.  Students learned to measure water potentials, light levels, stomatal conductance, chlorophyll content on these plants, as well as characterize the soil moisture and light level of their habitat.  Unbelievably, after many months with no precipitation it rained on the morning of the workshop.

The two photos above show our intrepid REU students measuring stomatal conductance (top photo) and leaf temperatures (bottom right) in the sun and shade populations respectively.  That's Corinna on the bottom right! That's Alex with the pressure chamber in the photo on the left!

(Above) Prof. Stephen Davis (Pepperdine U.) and his two REU students, Breahna and Helen during their visit to the UCSC campus and Fall Creek at Henry Cowell State Park in June 2013.  Note the size of the Woodwardia fimbriata on the right!

FERNWATCH - our annual survey since 2011

California’s redwood forests stretch from the northern end of the state to as far south as Big Sur and the central coast. Their narrow distribution is related to mild temperatures, abundant winter precipitation and importantly, abundant coastal fog.  The Save the Redwoods League, as well as top researchers from UC Berkeley and Humboldt State are currently studying the health of the redwood forests, mapping the canopy and surveying canopy biodiversity.  Contributing to this effort is FERNWATCH, an effort spearheaded by Dr. Emily Burns from the League and based out of my lab at UCSC.  Fernwatch seeks to monitor the health of the forest understory by targeting the swordfern (Polystichum munitum) as an indicator species of water availability, and potentially, a harbinger of climate change in the area.  Over the next 5-10 years, physiological as well as reproductive data will be collected from plants located in 10 redwood forest plots (see map to the left, blue=high precip, red=xeric climate), and used to inform management decisions concerned with the future of this unique ecosystem.

In late May of 2011 and 2012, Santa Cruz High School students surveyed the size and abundance of Polystichum munitum (swordfern), a common species in the redwood forest understory.  The size of the frond is closely related to site water availability so changes in precipitation and fog frequency (as predicted by climate change models) may affect the size and abundance of this species.  Ferns act as ‘filters’ in the understory, so a prolonged and sustained reduction in fern abundance will probably lead to a shift toward woody, shrub-like vegetation in the understory as well as higher abundance of invasive species.

The data collected during these field exercises will be coupled with regional precipitation data and shared with colleagues at the Save the Redwoods league who is collaborating with the Chabot Space Center (Oakland, CA) on several Citizen Scientist projects related to the redwood forest ecosystem See the photos on the left panel!